Many people view farm animals, and in particular poultry, as 'objects' or 'machines' with no capacity to feel pain, happiness, or other emotions. People comfortably relate to a dog or a cat as being able to feel pain and emotions such as sadness, happiness, affection and grief, but it is a different story when it comes to the animals we eat. As Hatkoff explains, farm animals display sentience which means 'being aware of oneself, one's surroundings, one's bodily sensations, and of the emotions corresponding to that awareness.(92) It means having an awareness of other non-humans and humans.

Research shows that farm animals have a wide range of feelings, including loyalty, sadness, joy, and fear'.(93) There is a popular belief that turkeys are 'stupid feeling-less beings'. However, the nervous system of turkeys is similar to that of mammals, so they suffer physical pain, just as humans, cats and dogs do. Turkeys also experience similar emotional states to humans, including fear, anxiety, frustration, boredom, pleasure and enjoyment.

A number of scientific studies have been conducted on turkeys and their emotional and psychological lives. Dr Ian Dunken (a poultry specialist) argues that turkeys possess marked intelligence and have complex social relationships and both visual and vocal means of communicating with each other.(94) Turkeys have been observed to display an overwhelming amount of concern and emotion for an injured or dying fellow bird. Karen Davis, from United Poultry Concerns has carried out a number of studies on turkeys. She explains that when a factory-farmed turkey has a convulsive heart attack, it can cause other birds around it to die, and argues that this indicates a strong sensibility in these birds.(95) 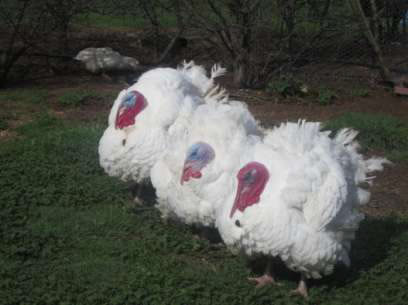