Factory-farmed conditions cause many sick and lame birds to become ill and die as a result of starvation and various injuries. Factory-farmed turkeys will often experience physical injury such as bruising and scratching as a result of birds attempting to reach the feeders while other birds are seeking rest. Inspections by animal advocates have revealed birds with injuries and significant feather loss caused by trampling (by other birds) and by being confined in severely restricted spaces. These injuries have been recorded on camera (see Figures 10 and 11).

These lame or injured turkeys may starve or become dehydrated because they cannot access the automated feed and water systems in the sheds. These systems are programmed to automatically rise in accordance with the expected growth rate of the birds. For example, near the end of the growing period the feed and water system height averages out at about 76cm and healthy turkeys are generally able to reach this.(55)

However, sick or injured turkeys are unable to reach the automated feed and water systems. The feeders and drinkers are raised intentionally in order to be out of reach of weak or sick birds, who are unable to eat any more food. Unhealthy birds who are not fit for human consumption are not 'profitable' to keep alive.(56) There are reports that 'on farm culling' is conducted to dispose of any weak or sick animals so they do not consume any more food. Inspections by animal advocates across Australia have revealed many lame and injured birds, and such instances have been documented on camera. Symptoms of ill birds observed include:(57)

Evidence collected confirms a range of health and welfare problems, such as injuries and illness, among turkeys raised in this environment. Current factory farming methods and procedures magnify these problems and are unnecessary and cruel. 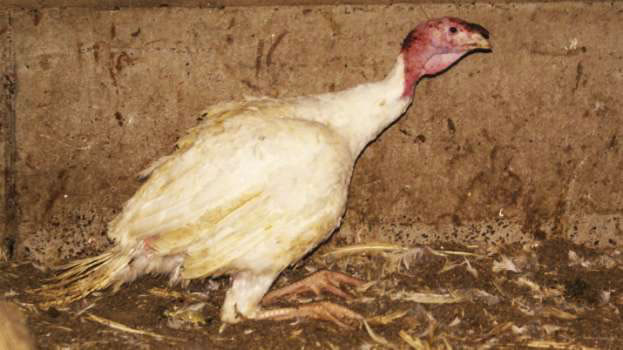 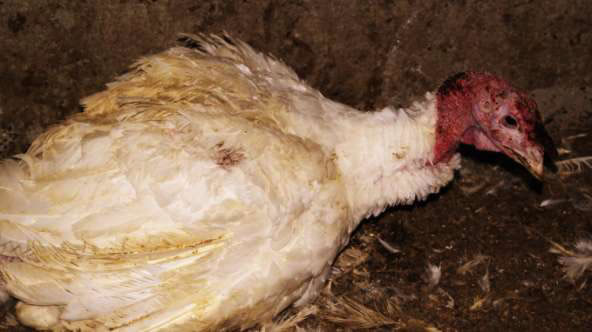 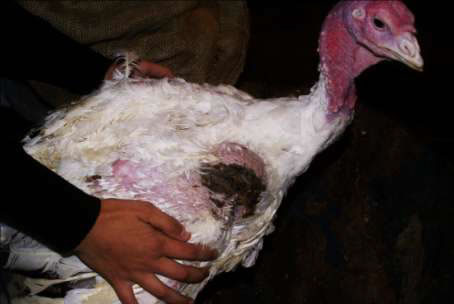 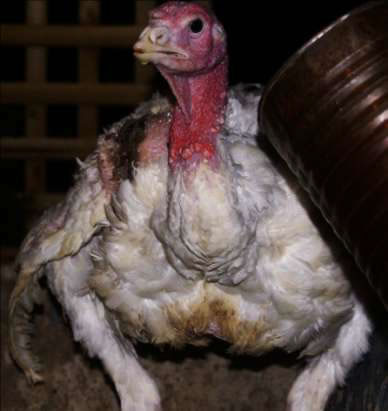 Figure 11: A factory-farmed turkey in Australia with severe injuries with an open wound on the right shoulder. The legs of the bird are distorted and spread unusually wide to support the overweight body. From the state of the injuries it appears that they had been left untreated for some time.