Breeder turkeys are bred to weigh up to 30kg and have an average life span of a year(76). This 'increased' life span causes ongoing stress and strain on the breeder turkeys' grossly overweight bodies. In Australia there are turkey breeding facilities based around Bargo in New South Wales, Beresfield in New South Wales, McLaren Vale in South Australia and St. Arnaud in Victoria.(77) (See Figure 14). 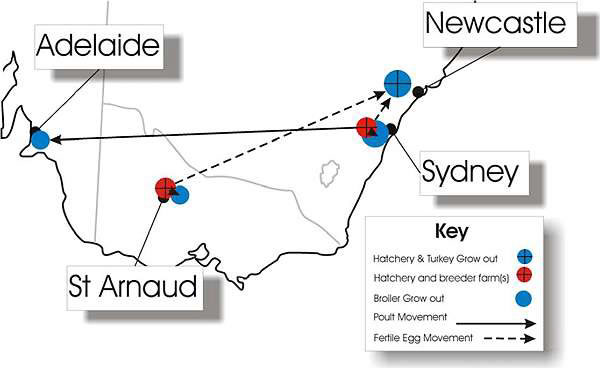 Breeder turkeys are fed severely restricted rations until sexual maturity in order to reduce problems such as excess weight gain and rapid growth which, due to their genetic make-up, would otherwise occur.(79) During this pre-maturity period the birds spend a lot of time pecking at shed walls and fittings and drinking excessively, indicating constant hunger.(80) Excessive weight gained after this period perpetuates hip degeneration, resulting in severe joint pain which can interfere with 'normal' activities such as trips to the feeders.(81) One study found 25- 50% of breeder turkeys on severely restricted diets suffer from hip degeneration.(82) This suggests that degenerative hip disease is common in breeder turkeys and is due to their unnatural genetic make-up.

Breeding turkeys are usually debeaked a second time (at approximately six months of age).(83) The welfare of breeder birds urgently needs to be improved, as current methods and procedures cause and perpetuate numerous health and stress problems.